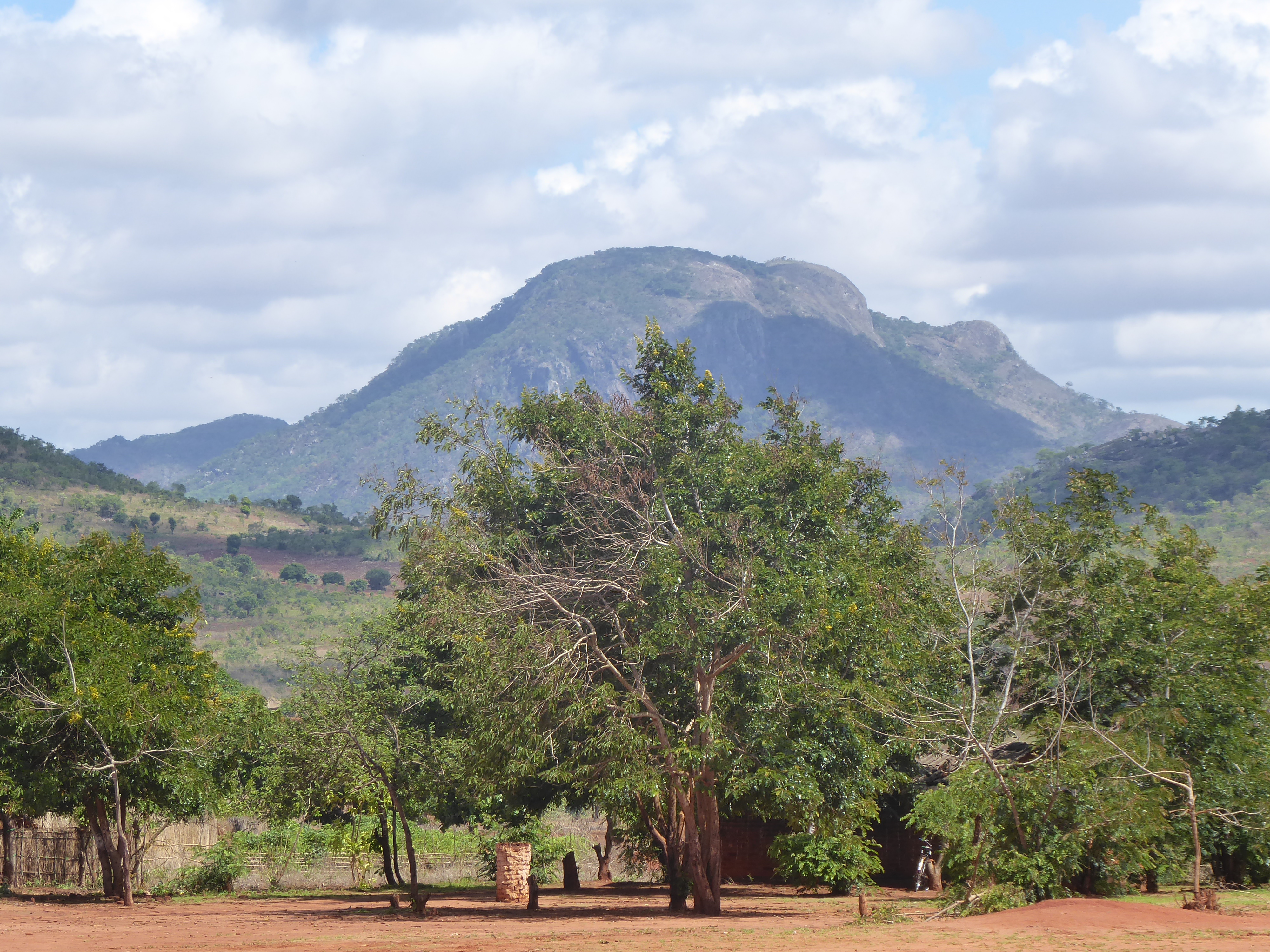 When they describe this as the rainy season they are not joking. As I mentioned in the last blog the rainy season has begun. And when it rains ……… it rains. When I first arrived I was told by those who were far more knowledgeable than myself that some of my schools would be impossible to get to in the rainy season. Having no experience whatsoever of the rainy season in Malawi I could not see how on earth these dirt tracks could be impassable.

Certainly they were rocky and had loads of holes and ridges, and in places were very narrow but impassable ……. never !

How wrong was I ?? When it rains it really rains and this is very often in the night, or at least it has been with a few downpours during the day.

This is torrential rain, the sort that wakes you up in the middle of the night with a few thoughts of “what on earth is that ?” descriptions such as “it’s coming down like stair rods ” (now they were an interesting piece of equipment that I remember from my Grandmas – do we still use them I ask myself ?),  ” raining cats and dogs!” “it’s p ………….ersistently raining” or expressions from around the world “It’s raining dung head-first.”, “It’s raining old women with clubs.” “It’s throwing cobblers’ knives.” and the good old favourite “Il pleut comme vache qui pisse”  Well all of these cannot describe what its like when it rains. But talk to a Malawian while I’m cowering under a shelter trying not to get wet and say ” The weather is horrible !” and they soon come back with “NO ! Not at all this is lovely weather !” after all its what they’ve been waiting for since last April. You never ever hear a Malawian complain about the rain. To quote “No Rain, No Life.”  To them its their livelihood and indeed the difference between life and death. They just walk out in it like it wasn’t there, through streams and puddles; i use the term puddle loosely because it’s not a ‘Christopher Robin puddle who goes splashing in his red wellies’, these are lakes that a small goat could drown in !

– which I guess it is. But the effects of these “rains” is enormous and these effects happen literally over night.

The dirt tracks can become just torrents of water.  Add this to the fact that the dirt tracks are narrow anyway and dangerous at the best of times, and literally the car ( have graduated to a car now just for the rain !) just slides from one mud bank to another. The water just doesn’t seem to go into the ground at all. It just sits on the top or rushes down the trenches either side of the track. In fact at this time you see lots of people, can be up to 50 usually women, all out with their hoes clearing the trenches and throwing the soil/mud onto the road. I can only presume this is so the water runs off the track and into the trench. This work is paid for by the local communities.

Driving in these conditions is not the easiest thing to do. Some of you now will be saying – you big wuss – well wuss I am ! There are some bridges that don’t look strong enough in the dry but in the wet …… I rest my case !

The usual hazards of poor vision, skidding, getting stuck in the mud, literally no way round a large “lake” and impossible to turn round all apply on the journey and usually all happen at the same time. It’s at this point that I wished Id talked more photographs of my journeys, but at the time when you are trying desperately to keep all your senses active, the camera is the last thing to think of.  So you manage all the hazards and your wheels are still turning and your moving forward when you see ahead the flashing indicators of a truck stuck up a hill ! There are around 30 people all around the truck, many of whom would have been passengers. All of them offering advice, and as my granny used to say – “Giving it a good coat of Looking !”

You have two choices stop and just wait for what could be a considerable time or try to go past the narrowest gap, on an incline into the ditch of about 45 degrees and just hope you don’t get stuck. And remember it is pleurring comme vache qui pisse ! I took the cowards way out and stopped. Behind me another truck stopped and waited. We waited and watched. After a while, the driver of the truck behind came up to me and said with a huge smile on his face – I’m going to try it ! I replied that I would watch him to see what happened ! Well he went and I watched from a distance as he edged very slowly past the stuck truck ! Being Malawian, he of course knew exactly what to do and manoeuvred his vehicle past. To my surprise he went past and then stopped, got out of his cab and beckoned me forward.

I had no choice but to try – the worst case scenario would be Id tip my car on to its side the best would be that I’d be so proud of myself for getting past ! Pride here I come ! As I edged past the truck, reving ferociously, playing the clutch, windscreen wipers on maximum speed, tilting at an angle of 45 degrees, and “It’s still  raining chair legs.” I guess at this point I closed my eyes and just drove feeling a bit like a motor cyclist on the wall of death ( do they still have those ?) Well suffice it to say I made it with out putting the car on its side. And as I passed the truck i opened one eye, and as far as I could see he was embedded in the muddy waters, I looked up at the driver, who had a big beaming smile on his face and he raised his thumb to say hi ! He wasn’t flustered at all, looking worried or anything – its just their way of life and they accept it. I have no idea how he got out and there is certainly no tow

truck to help him, but he must have got out because on my return journey all that was left were very very large muddy ruts in water.

The photo is of another incident when I had the presence of mind to take a photo. But tis man was just unloading the truck laden with grain He is standing in a torrent of water which is rushing down both sides. He couldn’t understand why I wasn’t passing and of course eventually I just had to as it is an impossibility to turn round.  So every day is a journey where literally you never know what is going to happen

But because of the ‘Rains” other more dramatic things happen I mentioned before that people just came out appeared in the fields to dig with their hoes but the results cf this hoeing and seeding is amazing.  Literally within weeks the fields as far as the eye can see the fields changed from dust bowls to luscious green baize.

And not just the fields, every spare piece of land, in between huts, in front of huts anywhere have  been cultivated. I was told today that 3/4 of the Malawian population are farmers which is amazing if its true and even if its an exaggeration certainly the majority of Malawians ‘cultivate’ !

The other effect is of course a huge drop in the school population.  A number of factors come in to play. Firstly many “Learners” are kept at home to go and work in the fields to sow and hoe the land. The other factor is of course with so many classrooms being ‘outdoors’ the rain of course completely wipes this classrooms out. “Learners’ know that of course so there is no need to go to school at all. Schools do look a sad site when it’s raining and many teachers also know there won’t be any learners there so they don’t go to school. I met one who was working on a stall and when I said why aren’t you in school teaching, he said “It’s raining there won’t be any learners and I wont have a classroom. ! ” Some classrooms may be a building but with only half a roof because of winds, again when it rains it can’t be used.

Am currently undergoing training the teachers on Life skills and Child Friendly Schools, Id love to talk about their training and the differences on what our main foci is – I hadn’t realised quite how different the  issues were But suffice it to say Im working with Primary school teachers An absolutely fabulous group of people whose challenges we couldn’t even begin to understand I mean start with 150+ in your class and thats just for starters. Ive asked their permission and they said they didn’t mind me reproducing these 2 photos here to give some idea of our training

And when one of their tasks is to how to work with the “Learners” on Building Self-Esteem – you understand the enormity of their challenges:-

When it rains during the training, the teachers thoughts all go to – how am I going to get home, as their only modes of transport are , walk, push bike or if they are very lucky motor bike and some have distances of 20 – 30 km to travel. One gains extra ‘brownie points’ if you let them go an hour earlier ……… and to be truthful the room is so dark anyway you can’t see any charts or posters, let alone the thought in my head of – ………..”Will I get home ? ”