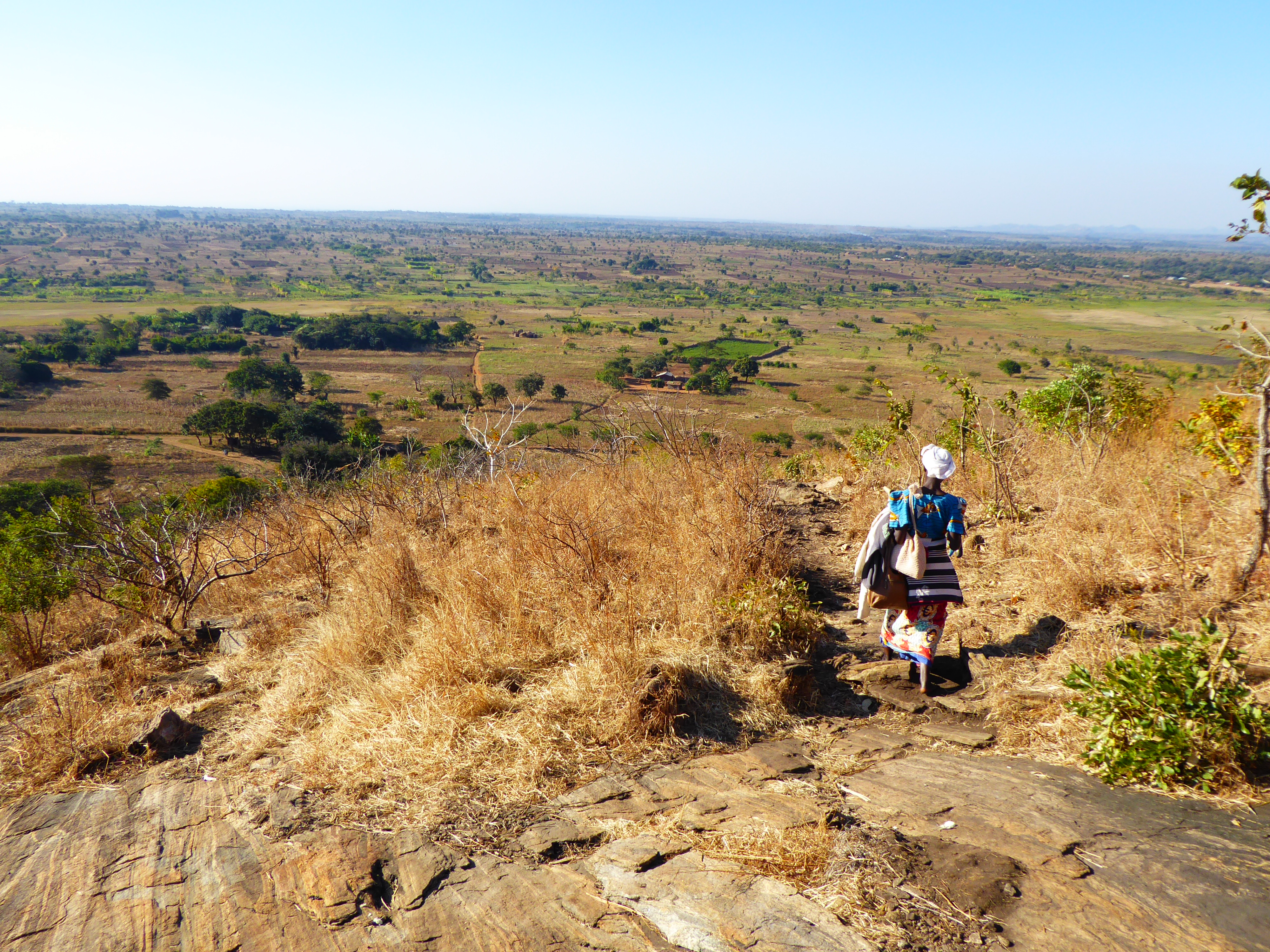 Well, having been here for a while – actually only 3 weeks but it seems like a while. And I guess that its debatable if three weeks is a while or not …… anyway I digress …… having spent every weekend in solitary confinement within my accommodation I was fortunate enough to be invited out by other volunteers who are working in Lilongwe. So in the words of Beverley Knight I decided to “Get Up” and accept the invitations. (showing my Pub Quiz pop knowledge there ! )   The first invitation was to join in a hill climb / walk. The hill in question is called Bunda – a Portugese/Brazilian word apparently that means Buttocks , Ass or Bum – no comment ! (Google it – it is honestly !) Now ‘Bunda’ is a bit like Moel Fammau (I think that’s how it’s spelt. ) because when I used to live in Chester I loved to look out to the Welsh mountains and listen to the Welsh choirs singing ………. ( well maybe not !) and see Moel Famau (Ive checked the spelling now and also started talking with a Welsh lilt – what’s that about  ?) This was the tallest mountain that I could  see from my house.

Well similarly ‘Bunda’ stands in the distance when you are in Lilongwe …….. except it’s steeper. higher , more remote and far far more difficult to walk up.  But not to be discouraged by that fact off we set in two cars to the foot of the hill. There are a number of things you have to understand in trying to envisage what I mean by the foot of the hill.  All around the land is perfectly flat and then like a cone just stuck on the land, Bunda rises up in front of you. There is no road of course that leads to the bottom, but a very bumpy dirt track with numerous pot holes and ridges, On arriving at the foot of Bunda there were a number of adults and children milling around two or three straw thatched houses.

We parked the cars and gave some money to the ladies sat on the wooden bench who said that they would look after the cars.  Now this wasn’t a “Do you want us to look after your cars mate or else we’ll pull your wing mirrors off” which one might find in some certain cities in England , but more of a ” We will look after your cars for you sir” and as we were kind of parked within 2 feet of their front doors – fair enough.

And so began the walk/climb up Bunda. We were joined by a group of 4 or 5 boys aged between 6 and 10 who offered to be our bodyguards, and guided us as to the best way.  This wasn’t like a walk up a  hill in the Lake district, or the Pennines  where you weaved your way through the rocks or at the very least some footholds to aid your ascent.  If you can

imagine getting hold of your tiled bathroom floor at one side and tilting it at an angle of 60º, and trying to walk up it with a lean of 45º then the is what it was like climbing up Bunda – smooth granite rock.   Needless to say the boys, barefooted, jumped and danced their

way up the slope, clearly knowing every turn. rock, slope that there was.  They had obviously grown up on this mountain and it was theirs. They took great delight in showing off its hazards and wonders.  Even more amazing was that as we were walking up, leaning at an angle of roughly 45º, coming in the opposite direction were ladies, many with babies strapped to them walking absolutely beautifully down the mountain, no panting, no looking that it was difficult, no looking tired, just walking , ………and there is no other word for it … majestically down the slope

It was an amazing walk up and I soon realised that this mountain had  certain religious connotations as at the top were some very crudely, yet beautifully  built shelters for people to go and stay in possibly for 2 or 3 days to pray.

At the top the views were absolutely amazing, due to the flatness of the surrounding land.

Views that were well worth the climb. In fact it was so calm and peaceful to just sit on the top that there was clearly a danger of staying up there for too long, and let the sun go down behind the horizon, as in Malawi it does tend to get dark around 5:30 to 6:00.  But we pulled ourselves away from the views and set off down, marvelling at the amazing sunset.

Thankful that our guides knew the exact route down as the sun eventually set, and we made it down just as the sun had set and we were in darkness.

The next excursion the following day, was completely different – a football match between two of the biggest teams in Malawi – Bullets v Silver

Now Bullets who have no sponsor,  apparently are ‘The People’s Team of Malawi and Silver do have sponsorship.  They are two rival teams who are from Lilongwe. Walking to the stadium was very much like a football match in England, crowds, people selling souvenirs. food etc.  We went into the expensive seats because this was the only side with a roof..  When I say seats it’s actually steps that you sit on, but everyone sits on the steps and no-one stands up on this side at all.  Whilst on the other three sides it’s all standing with no cover at all. The stadium probably holds about 15,000.  The pitch showed a few signs of grass but was extremely hard which meant the ball bounced excessively.

This bounce invariably meant that tackles were occasionally high and a number of injuries were sustained.  Whether this was normal or not I’m not sure but at least 8 players were taken off by stretcher during the game. There were various dances and considerable cheering as Silver took the lead 2- 0.  Two highlights of the match occurred towards the end of the Game, some stones were thrown at a player from The Silver team.  This resulted in the players and the referee standing around while the armoured car, throbbed into action and sped around to the far side of the pitch.  Now at this point I was going to take a photograph, but remembering my previous interaction with Officials within Malawi, I slid my camera back in to my pocket, as these guys in the Armoured car clearly meant business and I didn’t fancy explaining that I had just arrived and was unaware of anything at all !!!!!!.  The crowd who clearly were the target of the armoured car quickly disappeared, as the armoured car carried on its way around the pitch trying to spot the stone thrower – thoughts of Life of Brian came into my head ……….(Im not going to explain you’ll just have to watch the film and look out for the stone throwers !) –

Whilst all this was going on the referee restarted the game, and Bullets scored a goal but it was not acknowledged as a goal until at least 4 minutes after it had been scored ! The crowd needless to say were not happy with the result and as the match finished there were various ‘discussions’ going on between supporters.

To round the day off we visited a bar on the way home.  With iron bars on the counter of the Bar you had to pass your money through the bars and receive your drinks in a similar manner.  With our drinks in our hands we no sooner had put the drinks to our lips than all the electricity went off, and we were plunged in to the dark. Fortunately I remembered where my mouth was and it didn’t stop me from drinking a ‘Green’ , the local ale.

The electricity and hence the lights stayed off for the rest of the evening – drinking to the light of the torch on the iPhones – just a normal evening in Malawi, but a great one at that.

14 thoughts on “Buttocks and Bouncing Balls”